The Circle, Triangle & Hexad Part I: Gender Polarity & the Enneagram – by Susan Rhodes |

March 5 by The Running Son 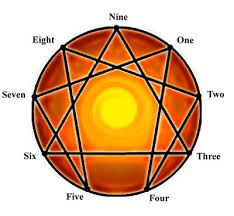 The Circle, Triangle & the Hexad Part I: Gender Polarity & the Enneagram

by Susan Rhodes, revised Jan. 2007, susan@enneagramdimensions.net
Read part 2 here: The Circle, Triangle & the Hexad Part II: The Mysterious Center Points of 3, 6, and 9
.
(from the introduction; click title above to view complete Article)
.
Ever since I started working with the enneagram, I’ve been interested in looking at its patterns. Some of these patterns are well-known, others less so. In this series on enneagram patterns, I explore some of the many patterns of the enneagram.
.
In this two-part article, I explore some basic enneagram patterns that involve the three figures we see in the enneagram: the circle, the hexad, and the triangle. I particularly focus on the relationship between thse three figures
.
I start with a subject of interest to just about everybody—sex. Somebody in a recent issue of the Enneagram Monthly asked why we never talk about sex. So here goes.
.
That said, this probably won’t be a terribly titillating talk (try to say that three times fast). But it does introduce what I hope are some interesting notions about how polarity—which shows up in every facet of life—is reflected in the figure of the enneagram.
.
Briefly, I see the right side of the enneagram as basically feminine and the left side as basically masculine (see Figure 1). More precisely, I like to map the male polarity onto the Head Center, the female polarity onto the Heart Center, and the neutral polarity onto the Body Center. I’m not the first to map these polarities onto the centers, although I may be the first to talk about it in print. The only reference I’ve seen to the topic is a remark by Katherine Chernick in the July ‘96 Enneagram Monthly, in which she briefly reports that Claudio Naranjo talks about the polarity of each center. Interestingly, according to her report, my mapping is identical to his. This is interesting (and encouraging) because I arrived at this position independently, based on my own observations. This offers support for the idea that this mapping is not arbitrary.
.
Assigning polarities to each center is an interesting exercise, but it’s most interesting as a jumping off point for a more far-reaching discussion. In this article, I talk not only about why these assignments seem plausible, but why knowing something about these polarities is useful to anyone studying the enneagram.