March 13 by The Running Son

What Was Maslow’s View of Peak-Experiences?

During the tumultuous years of the 1960s, Abraham Maslow devoted considerable attention to the topic of peak-experiences. Relying mainly on phenomenological reports of college students and colleagues, he became convinced of two key findings: First, that ordinary people may undergo genuine peaks in the seemingly most commonplace events and surroundings–while waiting for a bus on a sunlit city street, listening nostalgically to a romantic song on the radio, or preparing dinner for one’s family. 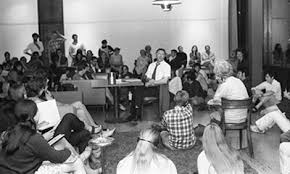 Maslow found it incredible that some of his undergraduates at Brandeis University unknowingly described their peak-experiences in language of rapture similar to those of famous spiritual teachers, East and West. The implication was clear: We needn’t be great religious mystics or even practitioners to undergo an unforgettable epiphany during daily living. Nor, as a corollary, Maslow asserted, is it necessary to meditate in a Tibetan monastery or travel exotically to gain such a wondrous encounter. As he poetically observed in RELIGIONS, VALUES, AND PEAK-EXPERIENCES, “The great lesson from the true mystics {is that} the sacred is in the ordinary, that it is to be found in one’s daily life, in one’s neighbors, friends, and family, in one’s backyard.”

Second, Maslow eventually felt sure that the more emotionally healthy we are, the greater the likelihood of a peak-experience and also the more frequent such episodes become in the course of daily-to-daily living. Maslow also suggested that as we age physically, the intensity of peak moments gives way to a gentler, more sustained state of serenity that he called plateau-experiences. Unlike peak-experiences, he advised, such plateaus can be cultivated through conscious, diligent effort.

Shortly before Maslow’s sudden death from a heart attack in 1970, he began developing exercises to help people achieve the plateau state of consciousness, such as gazing at a tiny flower intensely and with total attention, or at a familiar family member or friend and imagining “that you [or he/she] is going to die soon.” Such methods, Maslow proposed, can serve to break the dull, habitual way we relate to others and help us to see the world once more with freshness and delight.

As Maslow’s biographer, I can report that he almost never discussed his own peak-experiences, even with family members and close friends. Why? Because he was a very private person. From their scattered remembrances, I learned that he found greatest peace when listening to classical music–especially the Romantic composers–or when bird-watching on Audubon Society nature walks in pastoral New England. Sometimes, at night, to reach a desired inner state, he listened to recordings of birdcalls. Lovemaking with his wife, Bertha, was another source of revelatory joy for him, as he sometimes told her.

Unfortunately, Maslow as an experimentally-trained psychologist had almost no formal background in theology or comparative religion with which to gain additional conceptual ground in his explorations of numinous experience. His unpublished diaries from the 1940s through the 1960s certainly reveal a sharp intellect whose favorite philosophical thinkers included Martin Buber, Mircia Eliade, Viktor Frankl, William James, D.T. Suzuki, Paul Tillich, and Alan Watts. But Maslow’s reading in this domain was haphazard and unsystematic–and he lacked both a conceptual framework and a vocabulary for reaching higher into human transcendence.

After the birth of Maslow’s granddaughter Jeannie in 1968, he gained renewed interest in peak-experiences–especially concerning childhood. Intuitively, he felt sure that even young children possess the capacity for epiphanies and numinous moments, but lack the vocabulary for articulating these. Maslow hoped to begin empirical research on children’s peaks once his health improved. But he died before starting any systematic exploration on this fascinating topic. For the past six years with colleagues internationally, I’ve been researching peak-experiences of our early years. But that’s a subject for another blog post.