Brainstorm on the ‘need to CONTROL’ – personal, interpersonal, existential – by Jim Aldrich |

April 11 by The Running Son

I just nearly had a melt-down trying and failing to create a companion Facebook page for the RunningFather blog.  It was embarassing– I was punching at the sky like Forrest Gump’s Lieutenant Dan during the storm. I had to leave the computer and do some breathing to self-talk my pulse down like, “eeeeeeasy boy, easy now. There there, everything’s gonna be peaches in no time you’ll see” and crap like that.

As often happens when the dial hits red, I got to thinking. What is our relationship with controlling ourselves and our behavior verses being controlling in the negative sense?

The following thoughts are not nearly as clear and organized as I like, but what better reason to get some discussion going? So to the thoughts.

Control that works in tandem with natural biological processes and physical laws is part of daily life. Like many of us I control my daily schedule and I control my diet. I just finished controlling my physiological state by breathing and affirmation. I control the content and flow of my thoughts every time I concentrate, and I control my body temperature by wearing a jacket when it’s cold. Nothing to offend, defend or debate, so far.

But control has a darker side too, doesn’t it? A troubled teenager cuts herself to control the focal point of her emotional pain. A man controls his wife’s wardrobe. A cult leader controls his followers exposure to their friends and parents. A woman unlucky in love controls access to her broken heart by swearing off love forever.

Fritz Pearls insisted we stop “imaging”. A common way we image is by controlling how we see ourselves, our self-concept. A dear friend of mine– bless her heart– is so convinced of the virtue of her intentions that to actually be wrong is impossible in her mind. That’s an example of imaging. Fritz Pearls Gestalt method would have us abandon all effort to control and simply be present in the here and now where genuine experience exists.

Fritz Pearls successor Claudio Naranjo often alluded to presence. Claudio talked about “organismic regulation” of the body and mind, and roughly put he believed to be present and grounded in Being gives us access to our organisms natural impulses, which are the ultimate guides to proper thought and action.

On the other hand, there are books like The 48 Laws of Power. Law number 25, for example, tells us to “Re-create yourself.” The 2007 movie/book The Secret cites the law of Attraction which promises, “the Universe manifests abundance at a mere thought”. No talk of natural impulses there.

Maybe Maslows B-terms and D-terms will be helpful in framing the difference better. Control in response to deficiency-demands would be unnatural and harmful to ourself and/or others, whereas control that springs from Being (abundance) is in accordance with the human organism, and natural.

To wrap it up, some random thoughts on, questions about, and examples of control:

• NBA Superstar Magic Johnson in many ways was the poster-boy for spontaneity, but he admits that he felt he had to be in control of everything.

• In the extreme, rape, murder, suicide, cannibalism and necrophilia all have at their root the pathological need to control.

• Is good control merely about finding the correct balance or “frequency” of control? As if all control is qualitatively similar but becomes more damaging as it increases up the scale in intensity, complexity and/or impact on the environment and others?

• The basic elements of self-creation are found in a range of contemporary beliefs and institutions: Word-faith Christianity (“name it and claim it”), certain Existentialists like Jean Paul Sartre, explicit all through the modern occult, and of course the Law of Attraction and arguably Ayn Rands Objectivism, to name a few.

• To revisit the idea of self-creation (or self re-creation I suppose), I have a problem with this from jumpstreet. Aside from the artistic angle, like Madonna or Lady GaGa who move from style to style but whose identities are secure, what are the reasons for self-creation? To escape an unwanted self? That’s an identity issue, and a new identity will add nothing new. Must we self-create because there is no other source of personal direction or celestial design but imagination and human will? A sad, lonely cut-off existence that would be. Like Hell really.

• Psychology tends to agree: attempts at control originate from a sense of lack of control.

So, what do you think? Should we buy the book “The Secret” and start visualizing what we want, or stop craving and imaging and just be?

I’m off to control my stomach growls with some Key-lime yogurt. 😉 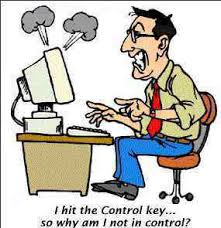 10 thoughts on “Brainstorm on the ‘need to CONTROL’ – personal, interpersonal, existential – by Jim Aldrich |”