April 11 by The Running Son 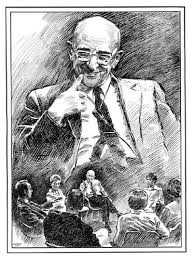 Carl Rogers, founder of humanistic psychology, developed four criteria through which one could discern when one Becomes a Person (whole, mature):

1. Openness to Experience: his own and that around him. “It is the opposite of defensiveness” (Rogers, 1961, p. 115). This openness includes the ability to see variation of truths rather than monolithic patterns which may have caused discordance and misunderstanding (incongruence) in the past. As Rogers noted, it enables a client to “tolerate ambiguity” (Rogers, 1961, p. 115).

2. Trust in One’s Organism: “There is a gradual growth of trust in and even affection for the complex, rich, varied assortment of feelings and tendencies which exist in him at the organic level” (Rogers, 1961, p. 119). This trust leads to greater self-acceptance and reliance on one’s inner wisdom. “Consciousness, instead of being the watchman over a dangerous and unpredictable lot of impulses, of which few can be permitted to see the light of day, becomes the comfortable inhabitant of a society of impulses and feelings and thoughts, which are discovered to be very satisfactorily self-governing when not fearfully guarded” (Rogers, 1961, p. 119).

3. An Internal Locus of Evaluation: Authority lies within the self rather than in society or another person. The central question shifts from trying to live up to or please others to: “Am I living in a way which is deeply satisfying to me, and which truly expresses me?” (Rogers, 1961, p119).

4. Willingness to be a Process: As stated earlier, Rogers believed the human experience is process rather than product. Thus, there needs to be recognition by the client that therapy does not end in the result of a fixed state in which problems are solved. Rather, it is the enabling of the person-as-process to be able to handle situations as they arise in each present moment and remain congruent and true to one’s self. This is the essence of “a process of becoming” (Rogers, 1961, p.122).

Brainstorm on the ‘need to CONTROL’ – personal, interpersonal, existential – by Jim Aldrich | »
« Oh Take a Humor Break! The Benefits and Risks of becoming a Charlatan… |